Emmis has 2 rock outlets now in Chicago.  It’s 2008 and web 2.0 is everywhere.  Chicago is on the verge of PPM, and RADIO is on the verge of NOT NEEDING Arbitron.  When you can measure how many people are listening to the stream(s) you don’t need an outside service to measure for you.  Flashback to WKQX before they announced their big brand change…  This would have been my announcement.

Hereto and henceforth, let it be written and shouted from the rooftops that the radio station broadcasting on 101.1 megahertz, licensed as WKQX Chicago, and known as “Q101″ will no longer be addressed, advertised, promoted, or operated as “Q101″ but instead will exclusively be referred to as….drum roll….

As we in radio know, that is not what happened.  Instead it was announced that the station would regress back to being Q 101.1, even though whenever the website is mentioned, it is just Q101.com.  The thinking is that since PPM is coming to Chicago, dial position matters more now.

Let that soak in.

I agree.  The thing is, people hearing the frequency on the radio station already know where to find the station.  All you need to do is make the dial position BIG and BOLD in your outdoor advertising and on your vehicles and marketing materials.  But on the radio station, you need to be the BRAND, not the address.  Imagine if McDonalds put their store addresses on the signs in front of their restaurants, instead of the arches.

The real rub is, when your audience is largely the Mellenial generation and beyond, (the ones plugged into the matrix from birth) you’re better off telling them to find you at Q101.com for everything.

So here’s an idea……Relaunch WKQX as Q101.com and put up 10 different versions of alternative music online.  Let listeners pick which ones are the best.  Showcase them on the radio signal and build a new kind of radio station. 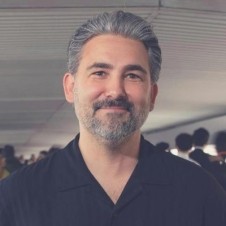